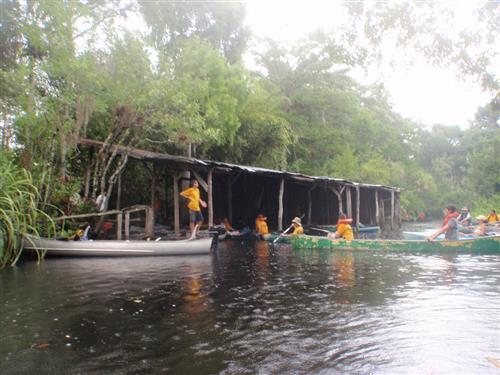 This location is said to be haunted by "Wild Man of the Loxahatchee," nicknamed Vince "Trapper" Nelson. He was said to have moved to the area in 1929 and made a living by trapping and selling furs, earning his nickname by his strange antics like swinging out over the river on a rope to startle the heck out of tour boat parties. He died in 1968 from a gunshot wound to the head. People claim he was a loner, which made them rule the death a suicide. Local legend says his ghost comes around from time to time, making conversation with witnesses, telling them that he was actually murdered by his brother. He has also been known to warn people against going toward nearby Native American burial grounds, as well as to ask women for dates and pat them on the rear end. Shortly after his death, the property was purchased by the state and turned into Jonathon Dickinson State Park.