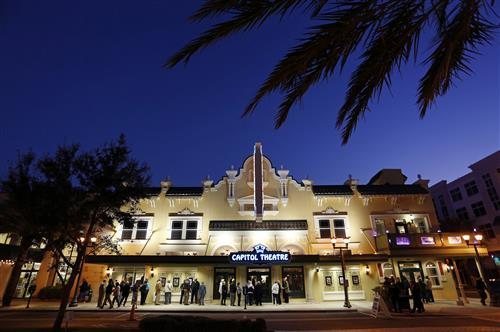 This theatre opened its doors on March 21st, 1921. In February, 1981, the theater became known as the Royalty Theater when the company signed leases with the Taylor family. During the renovations, the murdered body of Bill Neville was found in the balcony. The theater reamined in the Taylor family estate until 1996 when it was sold. In July 2008, the building went into foreclosure and the City of Clearwater and Ruth Eckerd Hall joined forces to purchase the theater (renamed Capitol Theater) in January 2009, as well as the neighboring Pat Lokey building. The theater is believed to be haunted and paranormal events have occurred here, including orbs being captured on film, alarms that go off unexpectedly, the chandelier swinging for no reason and three ghosts that are known to reside here. They include an old man with a goatee, who is known as "The Captain." He is known to walk the halls wearing a blue coat and fisherman's hat. The second is a ghost named "Bill" who was supposedly killed by tourists in the balcony. The last ghost is that of a young girl around the age of 10 who playfully watches over the theatre.