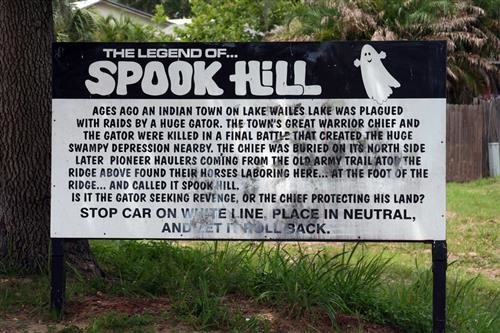 "Spook Hill is proudly recognized by the town. The ""thrill"" of the attraction is your vehicle seems to coast uphill. Is it a weird phenomenon, optical illusion or the unrest of spooky spirits? Well, the legend is that it's spooky spirits. After the Seminoles left the Cherokee nation, they settled in Central Florida. One legendary chief, Cufcowellax, settled on the lake which is now known as Lake Wales. It was close to Iron Mountain, which as the highest point in Florida, was sacred to the Indians' Sun God. After several years living in peace, a bull alligator began harassing the tribe and soon began nightly raids on the village, causing fear among the tribe.

The brave chief set out to conquer the evil spirt. When he did, the tribe noticed a small lake had formed near the big one. They named it Lake Ticowa.
Eventually, the Indians lost their camping grounds to the encroaching white settlers. Circuit riders carrying mail between the coasts used the old trial around Lake Ticowa until they noticed their horses laboring downhill. It was those circuit riders that first called the place Spook Hill.

As the area developed and the citrus industry crew, the hills around Lake Ticowa were covered with citrus groves. As workers would drive their wagons around the lake, they would find their mule teams struggling downhill with a load.

The road was paved years later and residents found their cars would roll uphill by themselves. Word spread and others came to test this phenomenon. Soon it became a major attraction for visitors.

A sign was erected that states, ""Many years ago an Indian village on Lake Wales was plagued by raids of a huge gator. The Chief, a great warrior, killed the gator in a battle that created a small lake. The chief was buried on the north side. Pioneer mail riders first discovered their horses laboring down hill, thus naming it ""Spook Hill."" When the road was paved, cars coasted up hill. Is this the gator seeking revenge, or the chief still trying to protect his land?"""